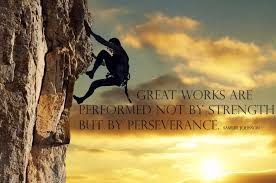 In those days, Amalek came and waged war against Israel. Moses, therefore, said to Joshua, "Pick out certain men, and tomorrow go out and engage Amalek in battle.  I will be standing on top of the hill with the staff of God in my hand."  So Joshua did as Moses told him: he engaged Amalek in battle after Moses had climbed to the top of the hill with Aaron and Hur. As long as Moses kept his hands raised up, Israel had the better of the fight, but when he let his hands rest, Amalek had the better of the fight. Moses’hands, however, grew tired; so they put a rock in place for him to sit on. Meanwhile Aaron and Hur supported his hands, one on one side and one on the other, so that his hands remained steady till sunset. And Joshua mowed down Amalek and his people with the edge of the sword.

Beloved: Remain faithful to what you have learned and believed, because you know from whom you learned it, and that from infancy you have known the sacred Scriptures, which are capable of giving you wisdom for salvation through faith in Christ Jesus. All Scripture is inspired by God and is useful for teaching, for refutation, for correction, and for training in righteousness, so that one who belongs to God may be competent, equipped for every good work.

I charge you in the presence of God and of Christ Jesus, who will judge the living and the dead, and by his appearing and his kingly power: proclaim the word; be persistent whether it is convenient or inconvenient; convince, reprimand, encourage through all patience and teaching.

Jesus told his disciples a parable about the necessity for them to pray always without becoming weary. He said, "There was a judge in a certain town who neither feared God nor respected any human being. And a widow in that town used to come to him and say, 'Render a just decision for me against my adversary.' For a long time the judge was unwilling, but eventually he thought, 'While it is true that I neither fear God nor respect any human being, because this widow keeps bothering me I shall deliver a just decision for her lest she finally come and strike me.'"  The Lord said, "Pay attention to what the dishonest judge says.  Will not God then secure the rights of his chosen ones who call out to him day and night?  Will he be slow to answer them?  I tell you, he will see to it that justice is done for them speedily.  But when the Son of Man comes, will he find faith on earth?"

Our Gospel today is all about Jesus' teaching or encouragement to His Disciples, to pray unceasingly, to pray with perseverance.

Have you ever stopped praying? Did it ever happen to you that after praying for so long, you decided to give up and rather stop? If that happened to you, I guess this Gospel is for you. And to those who have not given up praying, this is also for you. This is for all of us.

First, it is because God is our Father who owns us and claims us as His own. And because He is our Father, definitely, without any delay, He will grant us what we ask for, especially if that conforms to His will, especially if our petition will make us better. He is a loving Father who knows what's best for us and our lives. He is a loving Father who knows us through and through, from the very beginning, until our end. He will not abandon us; we will not be left behind. We will not want, because God will provide for us.

Second, we are not to give up on prayer because, definitely, there will be assistance that will come to us. There will be people, circumstances or situations that will contribute to the answer for our petitions or prayers. In the First Reading, we can see that during the battle between the Israelites and the Amalekites, when Moses raised his staff, the Israelites win over the Amalekites who are fearsome and are used to battle. But of course, it is a long battle, so Moses got weary and felt fatigue in his arms. But there were Hur and Aaron, who held the arms of Moses to raise them. They stayed beside Moses for his arms to remain lifted. Because of that assistance, the Israelites won the battle.

In the Gospel, there may be some sort of comparison between God and the unjust judge. But if we look at another angle of the Gospel, we can also say that the fulfillment of our prayers can also come from unexpected people, from the person whom you least expect to help you. In the Gospel, the widow received what she wished for through the unjust judge. It is the same with us. But sometimes, we easily give up because when we look around, we do not see any person who can help us. We feel alone, and because of this, we give up. But the Lord tells us not to give up, as He will use anyone, even the least expected, to come to our rescue.

I remember, in 2005, there is this female topnotcher in the bar exam. If I am not mistaken, her name is January Sanchez. She topped the bar exams. When she was asked what contributed to her success, she gave six answers. First is hard work. Second is the support of her family. And what were the four remaining reasons? Prayer, prayer, prayer, and prayer.

The celebration of the Eucharist reminds us that we should be persistent in our prayer. In Bohol, a broadcaster of one of the big TV networks witnessed a big congregation of Boholanos celebrating the mass, not inside the centuries-old church, but outside of the collapsed church. And the broadcaster could not contain the immense respect that was present during the celebration of the Eucharist, with the Boholanos in deep prayer, despite of the ruins around them. But I guess that is the secret of the Filipinos. There is not much of a question when it comes to the Filipino's perseverance in prayer. Despite natural disasters or calamities, the Filipino continues to pray, and this continues to shape and form us, and make us better believers and followers of the Lord.

In this mass, as we thank God for the grace of perseverance in prayer, let us pray for our family and relatives who, at this very moment, may be losing hope in their prayer efforts. Let us pray for them, so that altogether, we may find faith in the Lord, and that the Lord may find strong and firm faith in us.