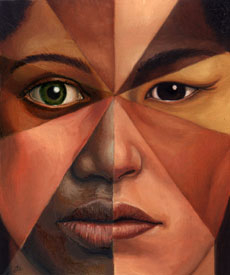 Thrones were set up and the Ancient One took his throne. His clothing was bright as snow, and the hair on his head as white as wool; his throne was flames of fire, with wheels of burning fire. A surging stream of fire flowed out from where he sat; Thousands upon thousands were ministering to him, and myriads upon myriads attended him. The court was convened and the books were opened.

As the visions during the night continued, I saw:

Beloved: We did not follow cleverly devised myths when we made known to you the power and coming of our Lord Jesus Christ, but we had been eyewitnesses of his majesty. For he received honor and glory from God the Father when that unique declaration came to him from the majestic glory, “This is my Son, my beloved, with whom I am well pleased.” We ourselves heard this voice come from heaven while we were with him on the holy mountain. Moreover, we possess the prophetic message that is altogether reliable. You will do well to be attentive to it, as to a lamp shining in a dark place, until day dawns and the morning star rises in your hearts.

Jesus took Peter, John, and James  and went up a mountain to pray. While he was praying his face changed in appearance  and his clothing became dazzling white. And behold, two men were conversing with him, Moses and Elijah,  who appeared in glory and spoke of his exodus  that he was going to accomplish in Jerusalem. Peter and his companions had been overcome by sleep,  but becoming fully awake,  they saw his glory and the two men standing with him. As they were about to part from him, Peter said to Jesus,  “Master, it is good that we are here; let us make three tents, one for you, one for Moses, and one for Elijah.” But he did not know what he was saying. While he was still speaking,  a cloud came and cast a shadow over them, and they became frightened when they entered the cloud. Then from the cloud came a voice that said, “This is my chosen Son; listen to him.” After the voice had spoken, Jesus was found alone. They fell silent and did not at that time  tell anyone what they had seen.

A woman entered an abortion clinic in the U.S., and after the ultrasound, she was shown on the monitor, the figure or the outline of her baby boy. The doctor said that 75% of women who see the ultrasound form of their babies would keep their babies, while 25% would not. The doctor, then, felt that the mother would be part of the 25% because she kept on saying, "I'm not prepared for this. We have not planned for this baby." Then, the assistant told the mother, "Why don't you touch his hand?" The mother moved her hands toward the screen and by a stroke of divine view, the baby in the monitor moved his hands and touched the tip of her mother's finger. The mother kept her baby.

The Transfiguration of our Lord Jesus Christ tells us that we must go beyond the ordinariness of things. This is because of our crisis of faith, when we say that we love God, but we do not love our neighbor. Anyone can say that he professes his belief in God, yet his neighbors see that he is lying. This is why during the Eucharist, when the priest raises the ordinariness of the bread, we must see beyond that. We must see the glory of God prefigured in that ordinary bread - the glory of God that we receive, each time that we receive the Eucharist. By doing so, by practicing and accepting God's truth, we can also accept our brothers and sisters in the ordinariness of their lives. Amen.