The revelation of Jesus Christ, which God gave to him, to show his servants what must happen soon. He made it known by sending his angel to his servant John, who gives witness to the word of God and to the testimony of Jesus Christ by reporting what he saw. Blessed is the one who reads aloud and blessed are those who listen to this prophetic message and heed what is written in it, for the appointed time is near. John, to the seven churches in Asia: grace to you and peace from him who is and who was and who is to come, and from the seven spirits before his throne. I heard the Lord saying to me: "To the angel of the Church in Ephesus, write this:

"'The one who holds the seven stars in his right hand and walks in the midst of the seven gold lampstands says this: "I know your works, your labor, and your endurance, and that you cannot tolerate the wicked; you have tested those who call themselves Apostles but are not, and discovered that they are impostors. Moreover, you have endurance and have suffered for my name, and you have not grown weary. Yet I hold this against you: you have lost the love you had at first. Realize how far you have fallen. Repent, and do the works you did at first. Otherwise, I will come to you and remove your lampstand from its place, unless you repent."'"

As Jesus approached Jericho a blind man was sitting by the roadside begging, and hearing a crowd going by, he inquired what was happening. They told him, "Jesus of Nazareth is passing by." He shouted, "Jesus, Son of David, have pity on me!" The people walking in front rebuked him, telling him to be silent, but he kept calling out all the more, "Son of David, have pity on me!" Then Jesus stopped and ordered that he be brought to him; and when he came near, Jesus asked him, "What do you want me to do for you?" He replied, "Lord, please let me see." Jesus told him, "Have sight; your faith has saved you." He immediately received his sight and followed him, giving glory to God. When they saw this, all the people gave praise to God.

But even though physically, we can see, there are just times when we are also blinded. And we can be blinded. If you look at our relationship probably with our family, what are the things that blind you in your relationship with your family? Probably your husband or wife. There are times when we are blinded by anger because our loved one has been unfaithful. It has blinded us, that it is so difficult to renew the relationship. There are also times when we are blinded by sickness. When we ask, "Lord, why me?", especially people who are suffering cancer, and those who have been diagnosed with a terminal stage of cancer. "Lord, bakit ako pa? Mabait naman akong tao. Maraming masasama diyan, bakit hindi pa sila?" Or even broken relationships in which our loved ones left us. "Nagmahal naman ako nang totoo, bakit ako iniwan? Bakit ako sinasaktan?" Or even financial.

There are a lot of things in life that, though we can see clearly through our physical sight, there are times when we are blinded, not only by people, but also by situations, experiences, challenges in life. But in our Gospel today, we can learn from the blind man, because through the eyes of faith, though the man was blind, he was able to see Jesus. He only learned that Jesus was there, and yet he already believed that he can be healed by Jesus. That is why when Jesus called him out, and he came face to face with Jesus, he was clear of what he wants. "Lord, I want to see." Compare it with the other people who were following Jesus. Although there was a blind man begging to be noticed by Jesus, there were people, who, rather than bringing others closer to Jesus, became a hindrance. They rebuked the blind man, rather than help him to be with Jesus.

Sisters and brothers in Christ, this year is the Year of Faith, and we are challenged to look beyond, not just the rooting of our faith, not just attending masses, not just praying the rosary. Our masses, our praying the rosary and novenas must be expressed in action so that through us, through you, people will also see that yes, God is present, God is here - because of you.

Sisters and brothers in Christ, there are already a lot of problems in our world, and I am sure that there are problems within and among our own families. May we strengthen our personal faith. May we lead other people away from their blindness, to experience that if I have the faith like the blind man in the Gospel, I don't have only the gift to see the divine, but I also have the capacity to lead and follow Jesus. At the end, in the Gospel, when the people saw what Jesus did to the blind man, they praised God. Through the blind man, they were able to recognize the divine that is present in Jesus. Let us pray through this mass, that all of us may be healed of our blindness - be it physical, be it emotional, be it spiritual. And hopefully find that with deep faith, nothing is impossible, because with God, all things are possible. Amen. 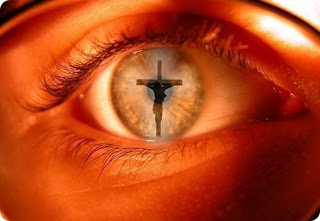