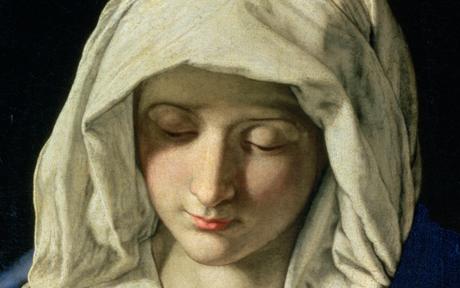 David assembled all Israel in Jerusalem to bring the ark of the LORD to the place which he had prepared for it. David also called together the sons of Aaron and the Levites.

The Levites bore the ark of God on their shoulders with poles, as Moses had ordained according to the word of the LORD.

David commanded the chiefs of the Levites to appoint their kinsmen as chanters, to play on musical instruments, harps, lyres, and cymbals, to make a loud sound of rejoicing.

Brothers and sisters: When that which is mortal clothes itself with immortality, then the word that is written shall come about:

The sting of death is sin, and the power of sin is the law. But thanks be to God who gives us the victory through our Lord Jesus Christ.

While Jesus was speaking, a woman from the crowd called out and said to him, “Blessed is the womb that carried you and the breasts at which you nursed.” He replied, “Rather, blessed are those who hear the word of God and observe it.”

Today, we once again honor our Blessed Mother. And some people would question us - why has Mary endured through all these ages? What is the secret of the mystery of our Blessed Mother, that until now, we continue to honor and venerate her, and recognize her as part of our redemption, which a lot of our misunderstood brothers and sisters from other sects do not accept?

The reason why we always include the story of Mary in our Gospel is because the Gospel will not be complete without the story of Mary. In the story of the fall of man - Adam and Eve - they had parallelisms which are very close to the story of Jesus and Mary. In the story of the fall of man, it was the woman who came out of the man - Eve coming from the rib of Adam. In the story of our redemption, it was man who came out from the woman. The Blessed Mother delivered her Son, Jesus. In the Old Order, it was the woman who first sinned and tempted the man to do the same. In the story of our redemption, it was the woman who first said 'yes' to the will of God, and Jesus was there to fulfill the mission of proclaiming the Good News to all of us, and to secure for us our salvation. While Adam and Eve were enjoying the fruit of their sin - eating the forbidden fruit - the woman and her son were suffering, agonizing, because of obeying the will of the Father. Jesus died on the Cross, while Mary was with a sword pierced in her heart. While Adam and Eve suffered immediately and were banished from paradise, Jesus Christ and Mother Mary were glorified immediately after their suffering. Jesus ascended into heaven, and Mary was assumed, body and soul, to heavenly glory. While the Ascension of Jesus is active, the Assumption of Mother Mary is passive, through the glory and power of God.

Five years after World War II, in 1950, Pope Pious XII declared and promulgated the dogma of the Assumption of the Blessed Virgin Mary and declared in his apostolic exhortation that the Immaculate Mother of God was rightly assumed, body and soul, to heavenly glory. But what is the meaning of all these in our present lives? Parang hindi natin makita ang kahulugan o hindi natin makita kung makaka-relate ba tayo dito sa istorya ng ating Mahal na Ina.

A lot of the experiences of Mama Mary are our own earthly experiences. Makita natin sana ang kahalagahan nito. Ang pinakamahalaga dito, kaya't pinarangalan si Maria ay dahil sa hanggang sa huli ng kanyang buhay, the Blessed Mother remained faithful and obedient to the will of God. That is why she is glorified. That is why she is being honored as the mother of all humanity, and the mother of our Church.

Let us remember her instruction to us: "Listen and do whatever Jesus tells you". Amen.

Posted by Unknown at 2:43 PM No comments: