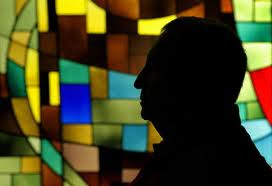 Brothers and sisters: Since we are surrounded by so great a cloud of witnesses, let us rid ourselves of every burden and sin that clings to us and persevere in running the race that lies before us while keeping our eyes fixed on Jesus, the leader and perfecter of faith. For the sake of the joy that lay before him Jesus endured the cross, despising its shame, and has taken his seat at the right of the throne of God. Consider how he endured such opposition from sinners, in order that you may not grow weary and lose heart.
In your struggle against sin you have not yet resisted to the point of shedding blood.

When Jesus had crossed again in the boat to the other side, a large crowd gathered around him, and he stayed close to the sea. One of the synagogue officials, named Jairus, came forward. Seeing him he fell at his feet and pleaded earnestly with him, saying, “My daughter is at the point of death. Please, come lay your hands on her that she may get well and live.” He went off with him and a large crowd followed him.

There was a woman afflicted with hemorrhages for twelve years. She had suffered greatly at the hands of many doctors and had spent all that she had. Yet she was not helped but only grew worse. She had heard about Jesus and came up behind him in the crowd and touched his cloak. She said, “If I but touch his clothes, I shall be cured.” Immediately her flow of blood dried up. She felt in her body that she was healed of her affliction. Jesus, aware at once that power had gone out from him, turned around in the crowd and asked, “Who has touched my clothes?” But his disciples said to him, “You see how the crowd is pressing upon you, and yet you ask, Who touched me?” And he looked around to see who had done it. The woman, realizing what had happened to her, approached in fear and trembling. She fell down before Jesus and told him the whole truth. He said to her, “Daughter, your faith has saved you. Go in peace and be cured of your affliction.”

While he was still speaking, people from the synagogue official’s house arrived and said, “Your daughter has died; why trouble the teacher any longer?”  Disregarding the message that was reported, Jesus said to the synagogue official, “Do not be afraid; just have faith.” He did not allow anyone to accompany him inside except Peter, James, and John, the brother of James. When they arrived at the house of the synagogue official, he caught sight of a commotion, people weeping and wailing loudly. So he went in and said to them, “Why this commotion and weeping? The child is not dead but asleep.” And they ridiculed him. Then he put them all out. He took along the child’s father and mother and those who were with him and entered the room where the child was. He took the child by the hand and said to her, “Talitha koum,” which means, “Little girl, I say to you, arise!” The girl, a child of twelve, arose immediately and walked around. At that they were utterly astounded. He gave strict orders that no one should know this and said that she should be given something to eat.

Yesterday, I made a comment about the strange and unusual story that we read from St. Mark about the healing of the man possessed by a legion of demons, and the demons entered into the herd of swine and got drowned. In order to fully understand this story, we have to know the mentality of the Jews. So St. Mark pictured to them the contrast between uncleanness, through the images of demons, tombs, pigs and pagans, and the purity and power of Jesus.

Our Gospel today is also quite a long one. We see two beautiful stories of healing - the daughter of Jairus and the woman who was suffering from bleeding. Again, it is something strange. The woman, who was maybe afraid, and perhaps also a pagan, secretly touched Jesus at the back. She touched His clothes, hoping that her situation will change, the moment she gets in touch with Jesus. And Jesus, realizing that power had gone out of Him, asked, "Who touched My clothes?" Naturally, the Apostles found the question very strange because everybody was crowding on Him. But Jesus said that somebody touched Him differently. Somebody touched Him with faith. That's the difference. Healing happened because of the faith of the woman. And Jesus also cured the daughter of Jairus, through the faith of Jairus and his family. Jesus said, "Do not be afraid. Just have faith."

What is faith? Faith is the one that enables us to get connected to God. Before, I used to feel uneasy when I see people touching statues, imploring and praying on the statues of saints, until I realized that that gesture is a sign of faith. God touches us by His power, by His love. But we get in touch with that power, by our faith. God touches us by His power, and we touch God by our faith. Amen.