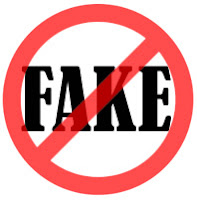 On that day they will sing this song in the land of Judah: "A strong city have we; he sets up walls and ramparts to protect us. Open up the gates to let in a nation that is just, one that keeps faith. A nation of firm purpose you keep in peace; in peace, for its trust in you."

Trust in the LORD forever! For the LORD is an eternal Rock. He humbles those in high places, and the lofty city he brings down; He tumbles it to the ground, levels it with the dust. It is trampled underfoot by the needy, by the footsteps of the poor.

Jesus said to his disciples: "Not everyone who says to me, 'Lord, Lord,' will enter the Kingdom of heaven, but only the one who does the will of my Father in heaven.

The presence of counterfeit items only indicate the value of a thing, how precious it is. The more precious or the more valuable it is, the more the fake items are present.

Spirituality is very precious and valuable. We can say this, because of the presence of fake spirituality around us. But this did not start only at our time. It began even during the time of St. Paul, when he was proclaiming the Good News and performing a lot of miracles. The high priests of other religious sects were envious of St. Paul, because a lot of people were coming to him. Kakaunti ang nagpupunta sa mga high priests, kaya naiingit sila.

There were seven sons of Sceva, a Jewish high priest, who observed what St. Paul was doing, so they could also do this for their constituents. So nakita nila ang ginagawang pagpapalayas ng demonyo ni St. Paul sa pamamagitan ng pagtawag sa Panginoon, kaya't ginaya nila ito. But when they told the evil spirits to go away, the evil spirits answered them and said, "Jesus, we know; Paul we know. Who are you?"

The Gospel is trying to tell us is that who we are, comes before what we do. Hindi pwedeng sabihin na tayo ay Kristiyano sa pangalan, pero kundi naman natin sinusunod ang kalooban ng Diyos, tayo ay peke at hindi tunay na mga Kristiyano.

We have to ask ourselves - what are our motivations, what is the purpose of what we are praying for? Maaaring nagdarasal tayo, nagsisimba tayo araw-araw, naglilingkod tayo sa simbahan, pero hindi ito sapat para masabi na tayo ay mga tunay na Kristiyano. For us to be called real Christians and genuine followers of Christ, we must do what Christ is telling us. The foundation of our being Christians must always be grounded on Jesus Christ, and not on anything else. Jesus must know us, and we must know Jesus. For us to be real Christians, we must follow His footsteps.

In the aftermath of typhoon Pablo that hit our kababayans in the South, a lot of them were victimized. Perhaps, it is time to ask ourselves. Are we planning to make a very nice or grand Christmas party? Maybe we could forego this and make it simple, and instead the money to be used can be given and donated to the victims - our Filipino brothers in the South.

My dear brothers and sisters, to be a real follower of Christ, we must be, first and foremost, a Christian by heart. Amen.