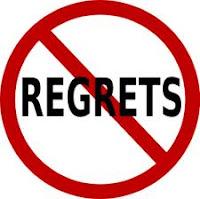 Take time to enjoy life today – or at least very soon.
For you never know how soon it will be too late.

He gives power to the tired and worn out and strength to the weak.
Isaiah 40:29 TLB

Posted by Unknown at 1:38 PM No comments:

Email ThisBlogThis!Share to TwitterShare to FacebookShare to Pinterest
Labels: 2012, Joy of Quotes, September 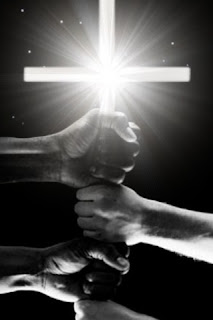 I am reminding you, brothers and sisters, of the Gospel I preached to you, which you indeed received and in which you also stand. Through it you are also being saved, if you hold fast to the word I preached to you, unless you believed in vain. For I handed on to you as of first importance what I also received: that Christ died for our sins in accordance with the Scriptures; that he was buried; that he was raised on the third day in accordance with the Scriptures; that he appeared to Cephas, then to the Twelve. After that, he appeared to more than five hundred brothers at once, most of whom are still living, though some have fallen asleep. After that he appeared to James, then to all the Apostles. Last of all, as to one born abnormally, he appeared to me. For I am the least of the Apostles, not fit to be called an Apostle, because I persecuted the Church of God. But by the grace of God I am what I am, and his grace to me has not been ineffective. Indeed, I have toiled harder than all of them; not I, however, but the grace of God that is with me. Therefore, whether it be I or they, so we preach and so you believed.

A certain Pharisee invited Jesus to dine with him, and he entered the Pharisee's house and reclined at table. Now there was a sinful woman in the city who learned that he was at table in the house of the Pharisee. Bringing an alabaster flask of ointment, she stood behind him at his feet weeping and began to bathe his feet with her tears. Then she wiped them with her hair, kissed them, and anointed them with the ointment. When the Pharisee who had invited him saw this he said to himself, "If this man were a prophet,
he would know who and what sort of woman this is who is touching him, that she is a sinner." Jesus said to him in reply, "Simon, I have something to say to you." "Tell me, teacher," he said. "Two people were in debt to a certain creditor; one owed five hundred days' wages and the other owed fifty. Since they were unable to repay the debt, he forgave it for both. Which of them will love him more?" Simon said in reply, "The one, I suppose, whose larger debt was forgiven." He said to him, "You have judged rightly." Then he turned to the woman and said to Simon, "Do you see this woman? When I entered your house, you did not give me water for my feet, but she has bathed them with her tears and wiped them with her hair. You did not give me a kiss, but she has not ceased kissing my feet since the time I entered. You did not anoint my head with oil, but she anointed my feet with ointment.
So I tell you, her many sins have been forgiven; hence, she has shown great love. But the one to whom little is forgiven, loves little." He said to her, "Your sins are forgiven." The others at table said to themselves, "Who is this who even forgives sins?" But he said to the woman, "Your faith has saved you; go in peace." 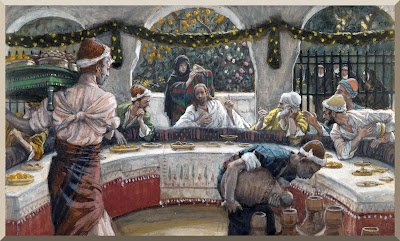 Mga kapatid sa pananampalataya, by that illustration, makikita po natin 'yong sinasabi ni St. Paul in the first reading. The Apostle was trying to remind his Corinthian community of the Word that has been preached to them, through which they were being saved, if they hold fast to the Word that is preached to them. Kung ang tawag natin sa lubid na 'yon pagtawid ng maalon na baha, is called a life line, then the Apostle is simply trying to remind the Corinthians that the life line to God - to salvation - is the Word. At ililigtas daw ang Corinthian community ng Salitang 'yon, if they hold fast to it. Pinagkakapitan nila nang husto 'yong Salita, because it is a life line. Release your grip on the Word, and you die.

Mga kapatid sa pananampalataya, that is what is being told us. The Word is a life line of the Christian. Hold fast to the Word as if to a rope in a strong current of flood, then you will live. Relax your grip on the Word, at aanurin ka ng mundo. And when it happens na anurin tayo ng mundo and we lose that grip, then we die.

Now we ask the question ourselves, my dear people of God, as we are challenged by this Word. Number one - The Word is a life line. Jesus is our life line. Point no. 2 - Tayo ba ay kumakapit dito nang kapit tuko sa Salita ng Diyos? At kung tayo ay kumakapit sa Salita ng Diyos, why do we hold fast to the Word? Is it simply because of practicality, is it simply because of a reason of necessity, or is it because of love, because we truly love? Ibang usapan po ang pagkapit sa Diyos by means of practicality or necessity, ibang usapan din po 'yong pagkapit natin sa Diyos dahil iniibig natin ang Diyos. At kung iniibig natin ang Diyos, we cannot afford to lose our grip on that Word, simply because when we lose our grip on the Word, we die. 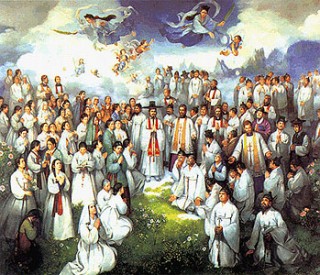