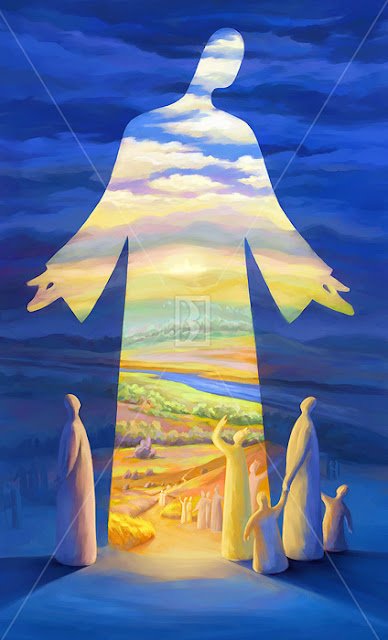 When Paul came to Antioch in Pisidia, he said in the synagogue: “My brothers, children of the family of Abraham, and those others among you who are God-fearing, to us this word of salvation has been sent. The inhabitants of Jerusalem and their leaders failed to recognize him, and by condemning him they fulfilled the oracles of the prophets that are read sabbath after sabbath.  For even though they found no grounds for a death sentence, they asked Pilate to have him put to death, and when they had accomplished all that was written about him, they took him down from the tree and placed him in a tomb. But God raised him from the dead,
and for many days he appeared to those who had come up with him from Galilee to Jerusalem. These are now his witnesses before the people. We ourselves are proclaiming this good news to you that what God promised our fathers he has brought to fulfillment for us, their children, by raising up Jesus, as it is written in the second psalm, You are my Son; this day I have begotten you.”

Jesus said to his disciples: “Do not let your hearts be troubled. You have faith in God; have faith also in me. In my Father’s house there are many dwelling places. If there were not, would I have told you that I am going to prepare a place for you? And if I go and prepare a place for you, I will come back again and take you to myself, so that where I am you also may be. Where I am going you know the way.”  Thomas said to him, “Master, we do not know where you are going; how can we know the way?” Jesus said to him, “I am the way and the truth and the life. No one comes to the Father except through me.”

The story is about a father and a son's relationship. The father was a successful eye doctor who has his son, who sort of lived an ordinary life, and the father could not understand why his son would rather choose that kind of life when he was a very successful doctor. Their relationship became distant, and he learned of his son's death while his son was having a pilgrimage to the El Camino de Santiago in Compostela, Spain. After the son's death, the father collected his remains, had them burned, brought the ashes with him, and continued the journey or the pilgrimage of his son to Compostela. And while traveling, he became closer to his son. It is the journey of the father that brought the two of them closer.

Now Jesus Christ is telling us that He is the only way to the Father. One old Hindu scripture says that "I come to you in whatever way you come to me", meaning that there are many ways to approach God in the Hindu belief. But in our faith, and when Jesus Christ said, "I am the Way, the Truth and the Life", he is saying that He is the only way to true and eternal life.

Probably, in the sense of making our own daily journey, we can say that we approach God in so many ways as well. But the actual deepest realty is that we know that Christ is the only way to our salvation. Our journey of faith here on earth will always remind us that there is no other way except through Jesus Christ.

And how do we proclaim this truth, this Good News to others? Not by words, but with our magnanimity and humility in sharing this Gospel truth to everyone, by being true witnesses of the Gospel values in our lives, in how we deal with other people, especially the least of them.

Yesterday, during the Feast of St. Mark, Pope Francis, in his Homily, instilled and emphasized the beauty of proclaiming the Gospel by our witnessing in our own lives. And he said that we must pray for magnanimity and at the same time, we must pray for humility. We may always proclaim Christ as our Savior, but how do we witness about Him in our lives? That must be one of our more important tasks in proclaiming the Gospel, the Good News, the Kingdom of God, to others. Not by mere words, but by humble witnessing. Amen.