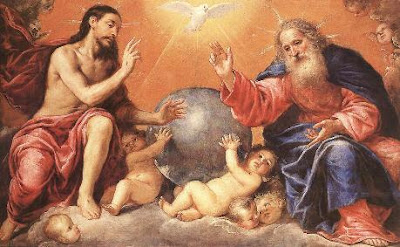 The assembly condemned Susanna to death.

But Susanna cried aloud: “O eternal God, you know what is hidden and are aware of all things before they come to be: you know that they have testified falsely against me. Here I am about to die, though I have done none of the things with which these wicked men have charged me.”

The Lord heard her prayer. As she was being led to execution, God stirred up the holy spirit of a young boy named Daniel, and he cried aloud: “I will have no part in the death of this woman.” All the people turned and asked him, “What is this you are saying?” He stood in their midst and continued, “Are you such fools, O children of Israel! To condemn a woman of Israel without examination and without clear evidence? Return to court, for they have testified falsely against her.”

Then all the people returned in haste. To Daniel the elders said, “Come, sit with us and inform us, since God has given you the prestige of old age.” But he replied, “Separate these two far from each other that I may examine them.”

After they were separated one from the other, he called one of them and said: “How you have grown evil with age! Now have your past sins come to term: passing unjust sentences, condemning the innocent, and freeing the guilty, although the Lord says, ‘The innocent and the just you shall not put to death.’ Now, then, if you were a witness, tell me under what tree you saw them together.” “Under a mastic tree,” he answered. Daniel replied, “Your fine lie has cost you your head, for the angel of God shall receive the sentence from him and split you in two.” Putting him to one side, he ordered the other one to be brought. Daniel said to him, “Offspring of Canaan, not of Judah, beauty has seduced you, lust has subverted your conscience. This is how you acted with the daughters of Israel, and in their fear they yielded to you; but a daughter of Judah did not tolerate your wickedness. Now, then, tell me under what tree you surprised them together.” “Under an oak,” he said. Daniel replied, “Your fine lie has cost you also your head,” for the angel of God waits with a sword to cut you in two so as to make an end of you both.”

The whole assembly cried aloud, blessing God who saves those who hope in him. They rose up against the two elders, for by their own words Daniel had convicted them of perjury. According to the law of Moses, they inflicted on them the penalty they had plotted to impose on their neighbor: they put them to death. Thus was innocent blood spared that day.

Jesus spoke to them again, saying, “I am the light of the world. Whoever follows me will not walk in darkness, but will have the light of life.” So the Pharisees said to him, “You testify on your own behalf, so your testimony cannot be verified.” Jesus answered and said to them, “Even if I do testify on my own behalf, my testimony can be verified,  because I know where I came from and where I am going. But you do not know where I come from or where I am going. You judge by appearances, but I do not judge anyone. And even if I should judge, my judgment is valid, because I am not alone, but it is I and the Father who sent me.
Even in your law it is written that the testimony of two men can be verified. I testify on my behalf and so does the Father who sent me.” So they said to him, “Where is your father?” Jesus answered, “You know neither me nor my Father. If you knew me, you would know my Father also.” He spoke these words while teaching in the treasury in the temple area. But no one arrested him, because his hour had not yet come.

"If you knew Me, you would know My Father also." "Kung kilala ninyo Ako, kilala n'yo rin Siya."