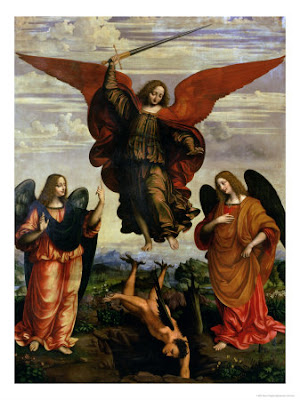 The liturgy celebrates the feast of these three archangels who are venerated in the tradition of the Church. Michael (Who is like God?) was the archangel who fought against Satan and all his evil angels, defending all the friends of God. He is the protector of all humanity from the snares of the devil. Gabriel (Strength of God) announced to Zachariah the forthcoming birth of John the Baptist, and to Mary, the birth of Jesus. His greeting to the Virgin, "Hail, full of grace," is one of the most familiar and frequent prayers of the Christian people. Raphael (Medicine of God) is the archangel who took care of Tobias on his journey.

According to the 1962 Missal of Bl. John XXIII the Extraordinary Form of the Roman Rite, today is the feast of St. Michael. St. Gabriel is observed on March 24 and St. Raphael on October 24.

The Catechism of the Catholic Church teaches us that, "The existence of the spiritual, non-corporeal beings that Sacred Scripture usually calls "angels" is a truth of faith. The witness of Scripture is as clear as the unanimity of Tradition."

Angels are pure, created spirits. The name angel means servant or messenger of God. Angels are celestial or heavenly beings, on a higher order than human beings. Angels have no bodies and do not depend on matter for their existence or activity. They are distinct from saints, which men can become. Angels have intellect and will, and are immortal. They are a vast multitude, but each is an individual person. Archangels are one of the nine choirs of angels listed in the Bible. In ascending order, the choirs or classes are 1) Angels, 2) Archangels, 3) Principalities, 4) Powers, 5) Virtues, 6) Dominations, 7) Thrones, 8) Cherubim, and 9) Seraphim. 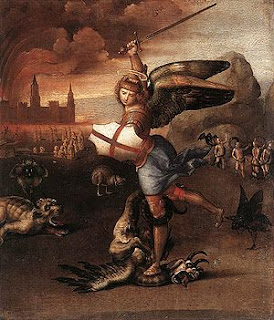 St. Michael
The name of the archangel Michael means, in Hebrew, who is like unto God? and he is also known as "the prince of the heavenly host." He is usually pictured as a strong warrior, dressed in armor and wearing sandals. His name appears in Scripture four times, twice in the Book of Daniel, and once each in the Epistle of St. Jude and the Book of Revelation. From Revelation we learn of the battle in heaven, with St. Michael and his angels combatting Lucifer and the other fallen angels (or devils). We invoke St. Michael to help us in our fight against Satan; to rescue souls from Satan, especially at the hour of death; to be the champion of the Jews in the Old Testament and now Christians; and to bring souls to judgment.

This day is referred to as "Michaelmas" in many countries and is also one of the harvest feast days. In England this is one of the "quarter days", which was marked by hiring servants, electing magistrates, and beginning of legal and university terms. This day also marks the opening of the deer and other large game hunting season. In some parts of Europe, especially Germany, Denmark, and Austria, a special wine called "Saint Michael's Love" (Michelsminne) is drunk on this day. The foods for this day vary depending on nationality. In the British Isles, for example, goose was the traditional meal for Michaelmas, eaten for prosperity, France has waffles or Gaufres and the traditional fare in Scotland used to be St. Michael's Bannock (Struan Micheil) — a large, scone-like cake. In Italy, gnocchi is the traditional fare. 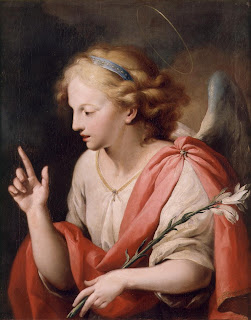 St. Gabriel's name means "God is my strength". Biblically he appears three times as a messenger. He had been sent to Daniel to explain a vision concerning the Messiah. He appeared to Zachary when he was offering incense in the Temple, to foretell the birth of his son, St. John the Baptist. St. Gabriel is most known as the angel chosen by God to be the messenger of the Annunciation, to announce to mankind the mystery of the Incarnation.

The angel's salutation to our Lady, so simple and yet so full of meaning, Hail Mary, full of grace, has become the constant and familiar prayer of all Christian people. 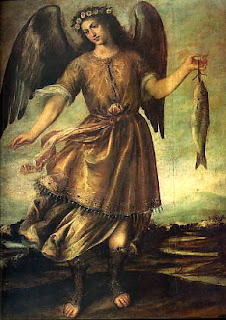 Our knowledge of the Archangel Raphael comes to us from the book of Tobit. His mission as wonderful healer and fellow traveller with the youthful Tobias has caused him to be invoked for journeys and at critical moments in life. Tradition also holds that Raphael is the angel that stirred the waters at the healing sheep pool in Bethesda. His name means "God has healed".

Sources for this article were taken from:  http://www.catholicculture.org

Heavenly King, You have given us archangels
to assist us during our pilgrimage on earth.
Saint Michael is our protector;
I ask him to come to my aid,
fight for all my loved ones,
and protect us from danger.
Saint Gabriel is a messenger of the Good News;
I ask him to help me
clearly hear Your voice
and to teach me the truth.
Saint Raphael is the healing angel;
I ask him to take my need for healing
and that of everyone I know,
lift it up to Your throne of grace
and deliver back to us the gift of recovery.
Help us, O Lord,
to realize more fully the reality of the archangels
and their desire to serve us.

Holy angels - pray for us

Prayer to St. Michael the Archangel

O God, You have given Your Angels in charge of us – To keep us in all our way

Saint Michael the Archangel,
defend us in battle.
Be our protection against the wickedness and snares of the devil.
May God rebuke him, we humbly pray;
and do Thou, O Prince of the Heavenly Host -
by the Divine Power of God -
cast into hell, satan and all the evil spirits,
who roam throughout the world seeking the ruin of souls.